An entomologist by training, Dr. Holly is a science communicator by passion and practice. She has worked at the intersection of science and society – in policy, natural resource management, and public engagement in science.

Holly earned a bachelor’s degree in biology from Denison University. She spent her college summers with net in hand, conducting ecological research on the insects living in the ponds and forests of central Ohio. She developed a particular fondness for dragonflies and damselflies, as well as Madagascan hissing cockroaches (which she kept as dorm room pets, much to her roommate’s disapproval!).

As a graduate student in the Behavior, Ecology, Evolution, and Systematics program at the University of Maryland, Holly focused on the ecology of insects living in and near streams. The 2004 emergence of the 17-year periodical cicadas in the Washington, D.C. metro area rocked her world and career trajectory – away from basic research toward a future in science communication. Holly and her cicada-maniac colleagues in Maryland’s Entomology Department took the media by storm, getting millions inside the Beltway (and beyond) jazzed about the boisterous, buzzing cicadas. Long after the cicadas were gone, Holly continued to appear as a regular “Bug-spert” on CNN’s American Morning, dishing out info and advice on mosquitoes, bed bugs, and summer insect pests.

Up for a challenge after her PhD, Holly spent time in Washington, D.C. taking science communication to a new level. As a senior public affairs associate with the American Institute of Biological Sciences, a nonprofit professional society, she focused on communicating the importance and benefits of scientific research and education to federal and state policymakers. Holly led strategic meetings with government officials and worked with other biologists to present their research in clear and compelling ways to the public through the media.

Holly then went back to the bugs (particularly the big, bad kind) in her work as senior extension associate in the Department of Natural Resources and coordinator of the NY Invasive Species Research Institute at Cornell University. She brought together research scientists, land managers, policymakers, and concerned citizens to protect New York State’s natural resources from threats posed by invasive species like the emerald ash borer and Asian longhorned beetle.  Holly also co-hosted and produced a weekly radio show called “Science Cabaret on Air,” mixing up a lively cocktail of science, culture, and art every Sunday on Ithaca’s 91.7 FM WICB.

In 2012, Holly headed south to NC State University to become the Director of Public Science for Your Wild Life, an outreach program affiliated with Rob Dunn’s lab that is dedicated to understanding and celebrating the biodiversity in our every day lives – from our belly buttons to our backyards. She helped build an internationally recognized program that engaged thousands of people around the world in a diverse array of citizen science projects, including Wild Life of Our Homes, Camel Cricket Census, Cat Tracker and Meet Your Mites.

In late 2014, Holly was appointed the inaugural Director of Public Science for the College of Sciences at NC State. Her chief role is to connect the College’s researchers (including faculty, students, and staff) to public audiences. She’s worked to establish a culture of public engagement in the College – increasing opportunities and participation in outreach, expanding the network of informal science learning partners, improving researchers’ science communication skills, and facilitating higher quality “Broader Impacts” activities in research proposals. Holly has lent her expertise to two larger public science initiatives at NC State: the Leadership in Public Science faculty cluster hire and the Wolfpack Citizen Science Challenge, a campus-wide citizen science initiative. She also holds an extension faculty appointment in the Department of Biological Sciences.

In those rare moments when she’s not living, breathing, doing public science, you’ll likely find Holly chasing her toddler, reading or putting up jars of fruits and veggies. 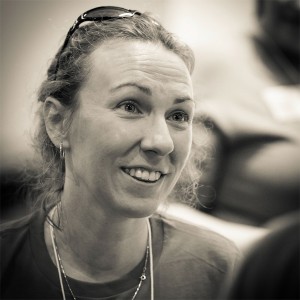